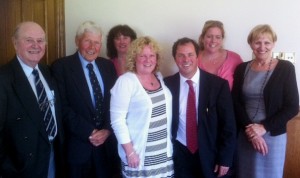 The Old Links Surgery Patient Participation Group has been meeting four times a year since 2004. There are six patient representatives covering an age range of 60 years.

The group discusses patient feedback from sources such as the national patient survey, NHS Choices website and the recently introduced Friends and Family Test. They suggest ways in which to improve performance and patient experience at The Old Links Surgery.

Does the Practice have a PPG? YES / NO YES

Method of engagement with PPG: Face to face, Email, Other (please specify) Face to face meetings

Number of members of PPG: 5

Detail the gender mix of practice population and PPG:

Detail of age mix of practice population and PPG:

Detail the ethnic background of your practice population and PRG:

A patient in her early twenty’s was asked to join the group in order to ensure that our younger patients are represented. This means that we had a good cross-section bearing in mind that we maintain a list of around 2000 patients.

35% of the patients do not have an ethnicity code on their records. It is clear, however, that only a minority of patients have mixed race/ethnicity. All of our patients speak and understand English.

Are there any specific characteristics of your practice population which means that other groups should be included in the PPG?
e.g. a large student population, significant number of jobseekers, large numbers of nursing homes, or a LGBT community? NO

If you have answered yes, please outline measures taken to include those specific groups and whether those measures were successful:

Outline the sources of feedback that were reviewed during the year:

How frequently were these reviewed with the PRG?

A member of the PPG commented that with the responses to all questions being excellent there is clearly nothing major that needs to be changed and that maybe it is the ‘small stuff’ that we need to look at.
The group discussed and agreed areas that might be improved – although all agreed that there were no issues relating to patient care that needed addressing. The suggested areas are listed below.

Lack of patient privacy when telephone calls are taken on the front Reception desk.

Impact on patient negligible as there had been no comments/complaints received directly from patients on this issue.

The practice profile leaflet has been reviewed and amended and new copies printed for the Reception area.

Up to date information provided to existing and prospective patients

The group discussed the proposal that the CCG would finance the upgrade of a number of practice websites. The general feeling was that the existing website was starting to look a little dated and could do with a refresh. It was agreed to pursue this proposal.

A new website was created by GP Web solutions and Dr Thorpe and the Practice Manager reviewed the content together with a member of the PPG during various iterations until such time that all were satisfied that the content and functionality were acceptable. Dr Thorpe arranged for practice-specific pictures to be taken and uploaded to the website rather than accept the ‘generic’ ones that came with the website.

Several patients commented that they liked the new website and they liked to see the personal photos on the site.

Allows patients to post responses to the Friends and Family Test in line with the GP Contract requirements.

Clearly shows the availability of the practice

Acts as a portal to the Patient Access system.

If you have participated in this scheme for more than one year, outline progress made on issues raised in the previous year(s):

How has the practice engaged with the PPG: Quarterly face to face meetings. Emails if additional information needs to be shared in the interim.

How has the practice made efforts to engage with seldom-heard groups in the practice population? I am not sure that any exist.

Has the practice received patient and carer feedback from a variety of sources? Yes – practice survey and national survey and NHS Choices

Was the PPG involved in the agreement of priority areas and the resulting action plan? Yes

How has the service offered to patients and carers improved as a result of the implementation of the action plan? The service itself did not necessarily need to be improved (see survey results) but patient information has improved.

Do you have any other comments about the PPG or practice in relation to this area of work?

The Practice PPG has been in existence for 10 years – the 10-year anniversary took place on 10th August 2014. There was a celebratory lunch with all members and representatives of the CCG –Mary Dowling (Chair) and Kevin Toole (Lay Member)